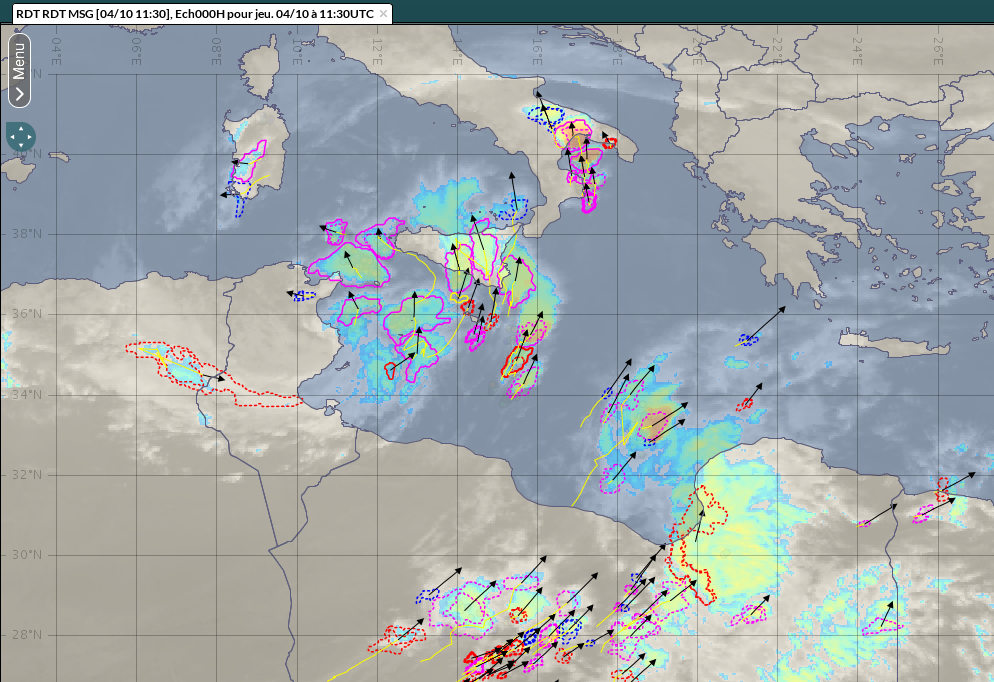 Goal of the RDT-CW product

The RDT-CW (Rapidly Developing Thunderstorm - Convection Warning) product has been developed by Meteo-France in the framework of the EUMETSAT SAF in support to Nowcasting. Using mainly geostationnary satellite data, it provides information on clouds related to significant convective systems, from meso scale (200 to 2000 km) down to smaller scales (tenth of km).

The objectives of RDT-CW are:

The object-oriented approach underlying the RDT-CW product allows to add value to the satellite image by characterizing convective, spatially consistent, entities through various parameters of interest to the forecaster such as motion vector, cooling and expansion rate, cloud top height... and their time series.

Thereby, RDT-CW is a tool for forecaster but can be used by research teams, and end-users like aeronautical users.

The detection of cloud systems

Prior to any analysis, RDT-CW undertakes a cloud filtering using CT product. All non-cloudy pixels are ignored through a dynamic cloud filtering. Since cloud type information is further used as attribute to cloud cell objects, CT is rather used than CMA product.

Moreover the product takes into account the deformation of pixels when on the edge of the spaceview domain. A mask of stretched pixels (pixels more than 5 * nominal_area) is automatically elaborated and backuped, and masked zones are ignored in the detection step, where gradients processing (used as predictor in discrimination scheme) should be less reliable.

The detection algorithm allows to define “cells” which represent the cloud systems as seen in the infrared 10.8 channel. RDT-CW cells point out the bottom of cloud towers included inside cloud system. The temperature threshold used to define the bottom of an RDT-CW object is the warmest one which allows to distinguish it from others nearby temperature extremes.

Brightness Temperature limitation or correction for some special cases

In order to increase the relevancy of the cloud contour, modifications have been introduced. These modifications concern the choice of the value for the bottom of tower (BT).

The tracking of cloud systems

For that reason RDT-CW software pre-calculates a movement guess field to consolidate this approach. A 2D movement field is estimated in optimum configuration with last available HRW wind observations. Those observations are filtered (selection of IR channels observations, using the corresponding valid pixel’s brightness temperature to keep one observation per pixel), and are remapped on the satellite grid-field region, through a weighted interpolation taking into account a radius of influence and a cut-off distance.

An additional blending with low level (700hPa) NWP wind field can be optionally processed where no information is available, but priority is given to HRW wind observations. This “guess” field allows:

For smaller cells, the use of a guess in tracking algorithm is crucial.

Motion vectors are estimated by default using displacement of weighted gravity centers positions in successive images. What's more a time-based coherence of motion vectors is undertaken to eliminate erratic estimation due to split, merge or differences in temperature thresholds.

The discrimination of convective objects

The goal of the discrimination method is to identify the convective RDT-CW objects among all cloud cells.

The left picture below displays all RDT-CW detected cells. It points out the detection and tracking efficiency of RDT-CW. We can notice the phenomena and scale diversity of RDT-CW objects. 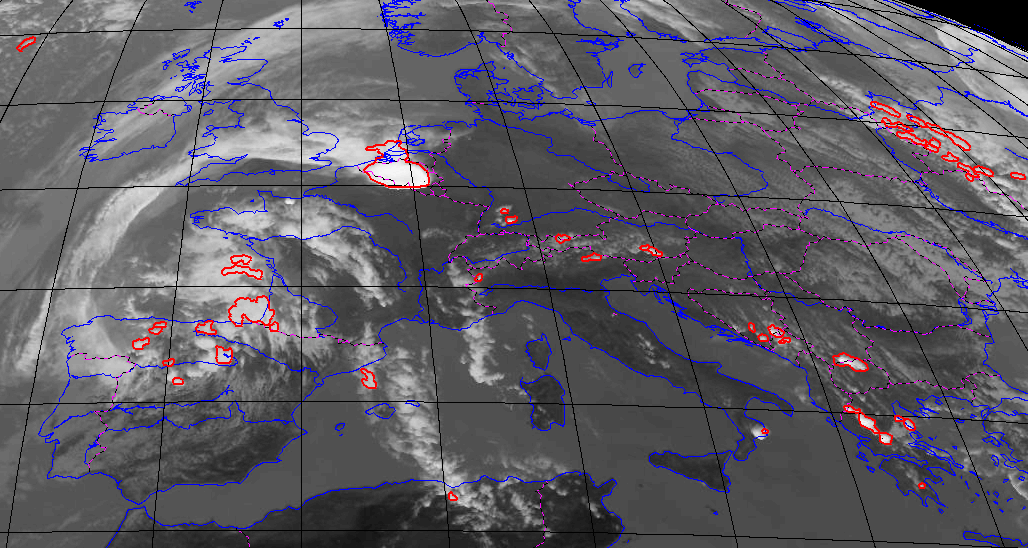 The discrimination scheme is a mix between statistical models and empirical rules:

NWP data is used for a guidance of discrimination scheme when available:

The discrimination scheme is described with further details into ATBD document.

Convective cells have their own dynamic and can have a trajectory that does not always follow the environmental displacement fields. The object mode of RDT-CW analyses the motion of each cell, and computes this speed. The forecast scheme uses this speed estimate to forecast the successive position of each cell. The Lagrangian method is proved to be quite efficient up to 1 hour range. Thus the forecast is proposed up to this limit. This leads, for MSG FDSS (15min update rate), to an independant product for each lead range (+15', +30, +45 and +60'). Corresponding products constitute the Convection-Warning part of RDT-CW.

The final products concerning RDT-CW are 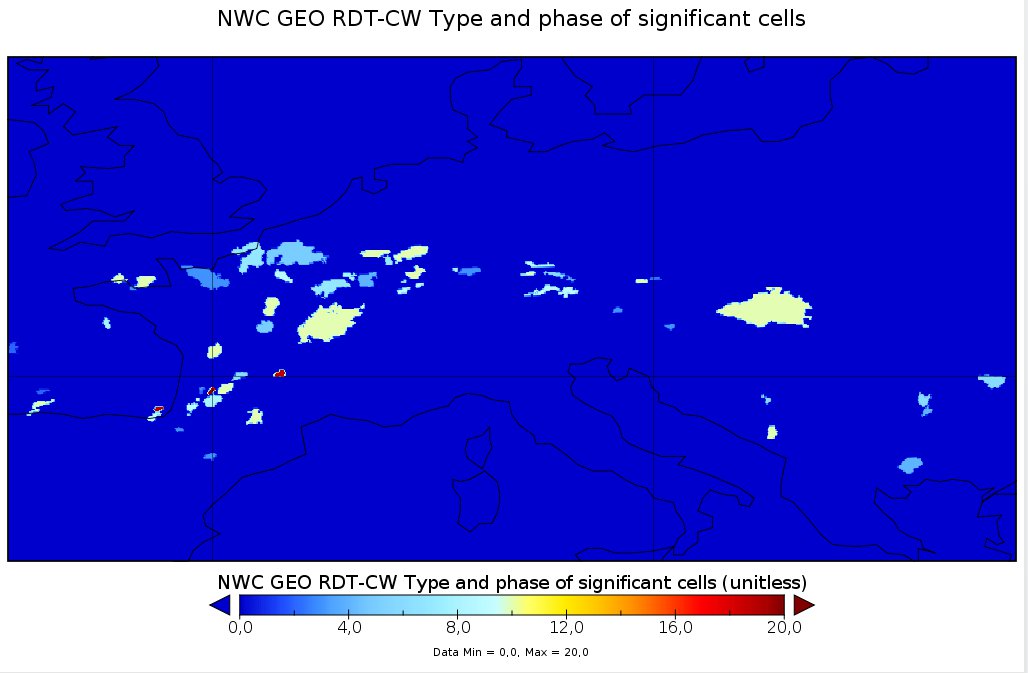 Example of RDT-CW analyzed map. For a correspondance between encoded values and Cloud type and phase, see DOF documentation

Access to visualization specifications for convection products on the NWC SAF (look for Code : NWC/CDOP2/GEO/MFT/SCI/RP/06).

The RDT-CW needs development of a dedicated post-processing, depending on given specifications: access to current cell's localizations and attributes, or access to the recent current trajectories (with historical past series) from a single RDT-CW product, or to the whole trajectory through a series of RDT-CW products, the latter case implying to manage the time-based links between cloud cells.

The Current Object-Netcdf and Trajectory-ASCII formats are described in the Document Output Format (DOF) of SAFNWC. Trajectory file is produced only on user's request (see List of inputs).

RDT-CW is visualized at Meteo-France on several platforms: 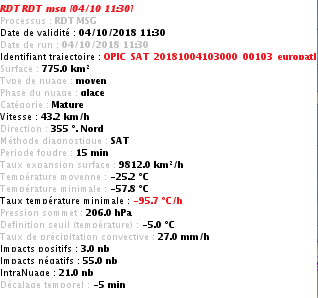 Example of product visualization with SYNOPSIS, RDT-CW cells on the left, gauge for one cell on the right (pop-up window). 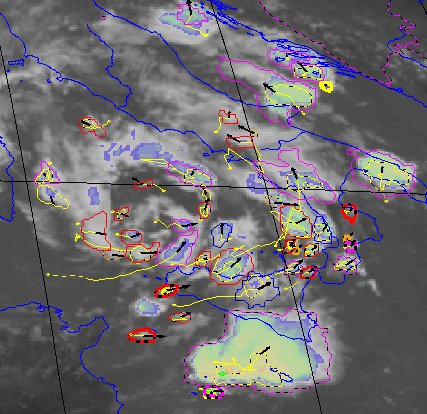 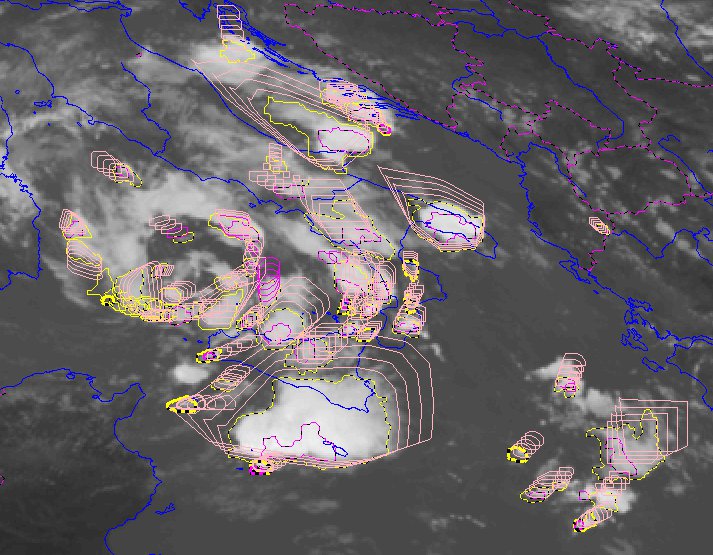 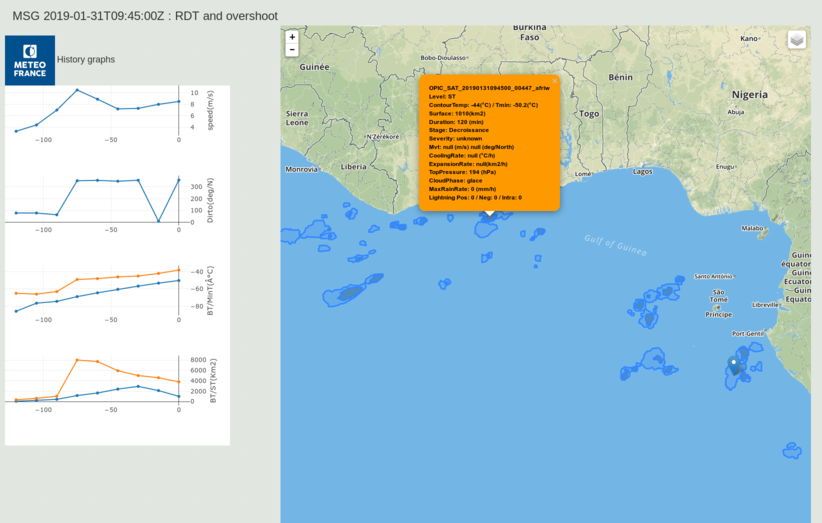