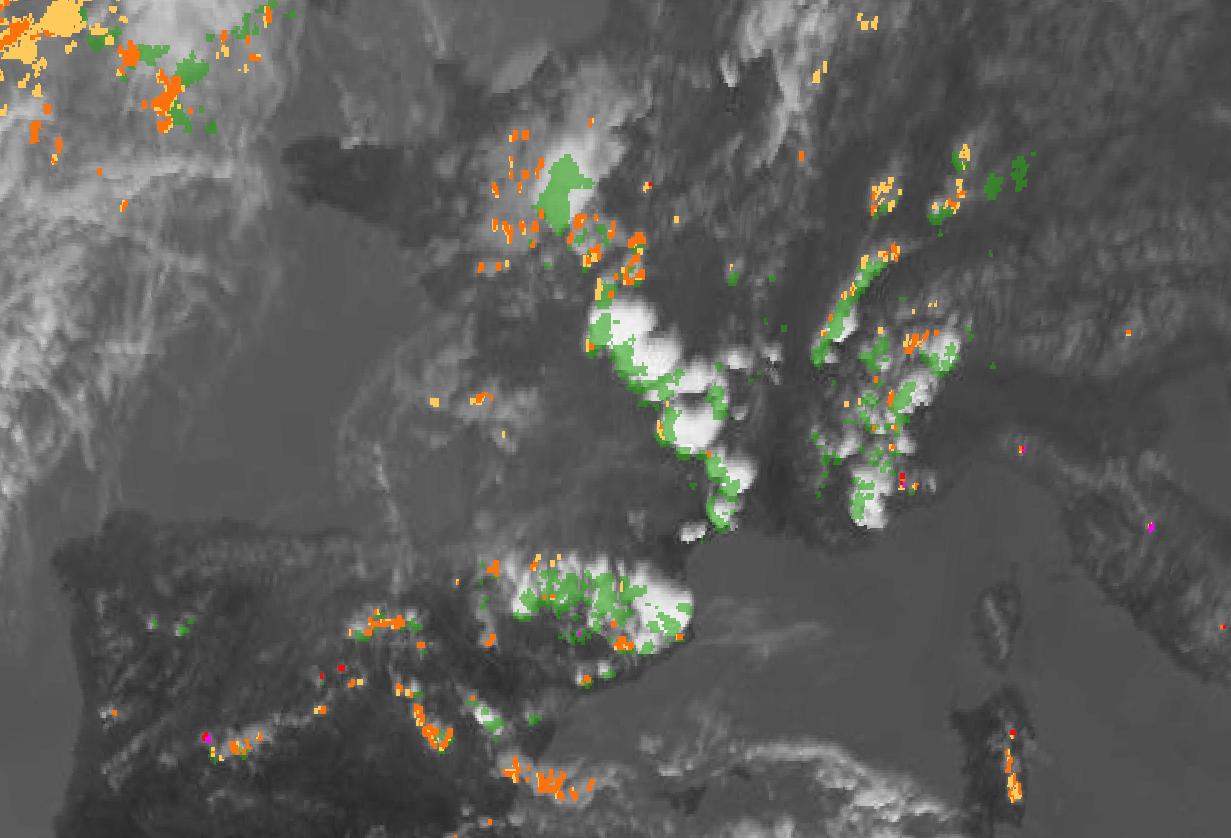 1. Goal of the CI product

The CI (Convection Initiation) product has been developed by Meteo-France in the framework of the EUMETSAT SAF in support to Nowcasting. Using mainly geostationnary satellite data, it provides the probability for a cloudy pixel to become a thunderstorm within a forecast interval. The product aims to catch the first steps of initiation of convection, when the first convective signs occur after the formation of clouds, or when those signs appear revealing a modification of environmental conditions.

Relevant parameters, thresholds and some part of the algorithm are inspired from:

Contribution to the validation has been made by:

Thus large areas are ignored. A restricted set of pixels is analysed.

A 2D movement field is estimated in optimum configuration with blending 850hPa NWP wind fields and last available HRW wind observations, remapped on grid-field and selected versus the corresponding pixel’s brightness temperature. Priority in the blending is given to HRW wind observations, affected to a 24-pixels-box centred on the corresponding pixel.

This blended field is at first used as guess movement for initialization in the tracking process of object analysis  (“cold start” cases, or orphan cells).
Then this field is updated with objects movement vectors, to finally be considered as a pixel tracker for trends calculations.

An object analysis process is undertaken. The objectives of this step are:

More details about tracking can be found in Convection products ATBD.

CI and RDT share some part of the algorithm concerning detection and tracking. Although in CI program the cell detection and tracking is performed over the whole troposphere to be realistic, only warm cells are considered to upgrade the movement field and only warm pixels are kept in further analysis (cold cloudy pixels filtering).

This step takes benefit from movement guess field input to increase cell’s speed reliability, and on the other hand delivers output an updated movement field with the analyzed objects’ speeds. All pixels belonging to a tracked cloud system are affected the corresponding movement speed instead of previous pixel’s movement values.

Brightness Temperature Differences are processed for each eligible-CI pixel from various available channels, for current data and data from previous slot. Trends computation and slot selection are adapted to satellite scan frequency.

Then, BT (IR10.8) and BTD trends are calculated for each eligible-CI pixel using the speed and direction of updated 2D movement field as guidance for identifying pairs of current and corresponding pixels in previous image.

When tracking of aggregated pixels (belonging to a tracked cloud system as object) is available, corresponding trends are used for some parameters instead of single pixel-trends, and should be able to provide trends over longer depth.

During day-time when microphysics parameters COT (Cloud optical thickness), LWP (liquid water path) and IWP (ice water path) are available from CMIC product, they are used as an additional filter to focus on relevant areas.

A cloudy pixel is eligible for convection initiation, only when at least one of the three microphysics parameters have a value over the threshold.

Pre-CI pixels have at least one significant relevant value (see table below).

During night-time, when microphysics parameters are not available, stricter thresholds are used for non-trend (static) parameters in order to limit the number of false alarms.

The CI output is estimated with empirical rules defined by count of relevant criteria. The principle is to sum up the number of relevant parameters (i.e. above relevant threshold given in the tables above) by group, giving greater importance to growth family parameters, then glaciation parameters, and finally vertical extension (height) group.

Once a pixel is diagnosed as CI, the diagnosis is spread all along the trajectory which has been defined according to the pixel tracker. The movement field is refreshed with pixel position when spreading the trajectory. Figure below illustrates the forward scheme.

The CI software is designed to allow the processing at normal resolution of any rectangular areas defined by the user inside MSG, GOES-16, GOES-17, HIMAWARI-8 or HIMAWARI-9 geostationary satellite domains (the processing of the full disk is also possible). The validity of the CI product is committed inside the MSG, GOES-16, GOES-17, HIMAWARI-8 and HIMAWARI-9 full disks. For example, the NWC SAF runs the CI on a MSG sub-domain centered on Europe.

Data are provided in NetCDF format.

The product is an image-like product. Its target structure contains three main containers dedicated to the three specified periods [0-30mn], [0-60mn] and [0-90mn]. All ci_prob containers have the same structure, given in table below.

The current CI-Netcdf format is described in details in the Document Output Format (DOF) of SAFNWC.

CI product is a pixel-based product.

The color code for visualization of CI is as follow: