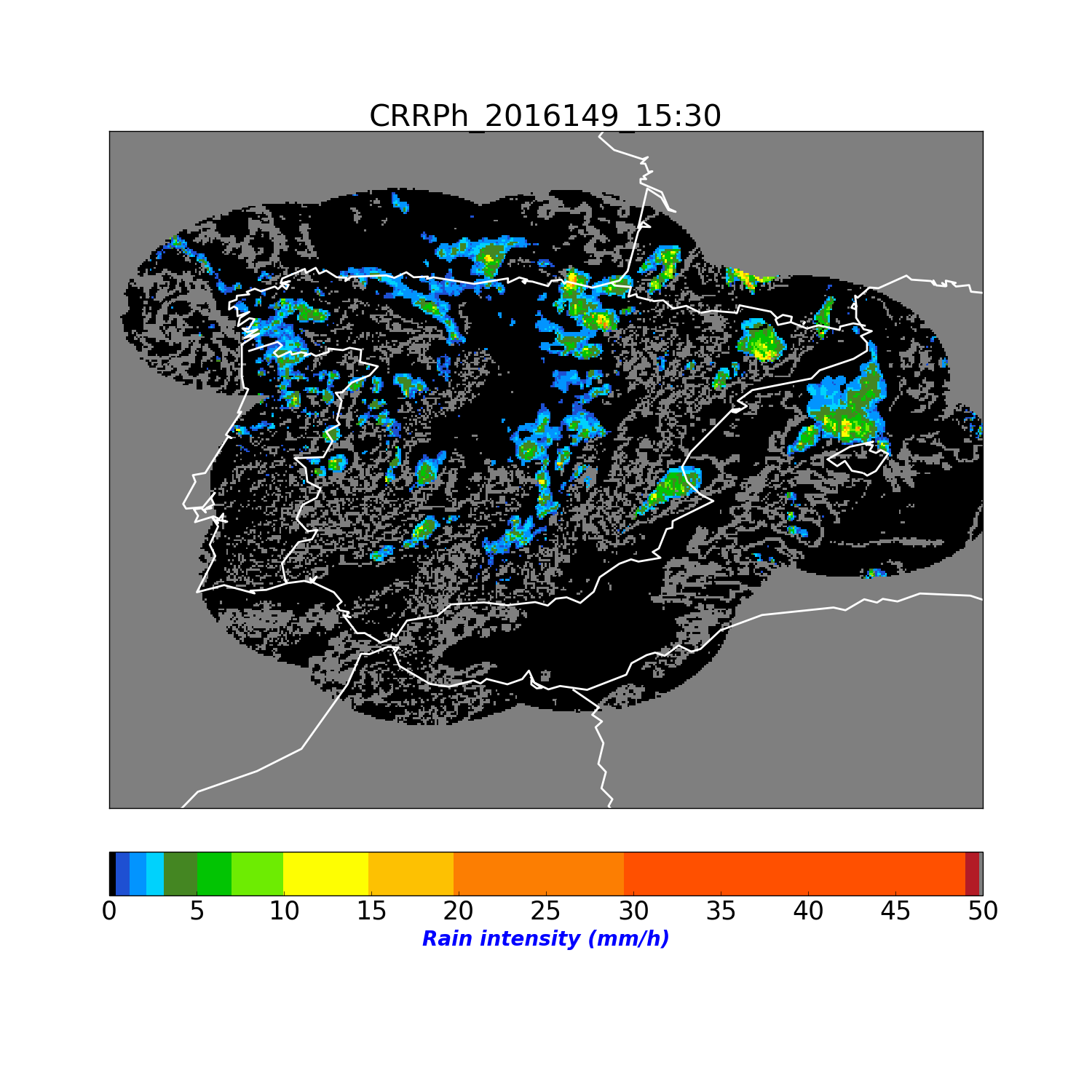 Access to "Algorithm Theoretical Basis Document for the Precipitation Product Processors of the NWC/GEO" for a more detailed description of the algorithm.

CRRPh v2021 is based on a Principal Component Analisis (PCA). Rain intensities estimations are done collecting information from the Cloud Phase, the Effective Radius (Reff) and the Cloud Optical Thickness (COT). All these three parameters are part of the CMIC retrieval. Based on COT and Reff, the Cloud Water is computed (CWP = 2/3 COT * REFF). The Cloud Phase is available during the whole day whereas Reff and COT are only available at day time. Along with the microphysical information, SEVIRI channels are also used: five infrared channels (IR8.7,IR9.7,IR108,IR120,IR134), one visible channel (VIS0.6) that has been normalized and corrected with the sun-earth distance and two water vapour channels (WV6.2,WV7.3)

CRRPh has been calibrated in convective areas. By using PCA’s satellite information has been compressed in two principal components that keep the 95% of the whole variance.

Taking into account the instantaneous rain rates computed in the last hour time interval, hourly accumulations are computed through a trapezoidal integration.

For a better precipitation area location a parallax correction can be applied to this product. This option is chosen by the user through the product model configuration file and it is applied by default. When the Parallax Correction is working, a spatial shift is applied to every pixel with rain rate greater than 0 mm/h.

One single algorithm is used for the whole day. That means the same inputs used at day time are required at night time. Since CWP and the VIS0.6 channel are only available at day time, an artificial method has been developed to create a pseudo-CWP and a pseudo-VIS06 derived from infrared and water vapour channels, also based on a principal component analysis.

An enhancement correction factor based on the Cloud Water Path (CWP) has been incorporated, being available for the whole day. This way, the CRRPh output have been modified, providing with more rainfall rate in those areas with more content of water.

Like other NWC SAF products do, such as the RDT-CI (Rapidly Developing Thunderstorm – Convection Warning) a stability mask is used. This mask make use of the NWP data to compute several convective indexes: K Index (KI), Showalter (SHW) and Lifted Index (LI). The combination of such indexes allow to identify stable regions where convection is unlikely to happen.

Precipitation output for CRRPh and PCPh is removed in those stable regions. This stable mask is an optional parameter and configurable by the user. It is set to use it by default. Stability correction is used to remove CRRPh output from areas where it is not likely to have rain based on NWP models, because those regions are considered stable. If a black whole inside a precipitating area appears, this effect may be directly attributed to this correction. Another known issue related to this correction is that the orography may produce some unrealistic shapes. These artefacts produced by mountains are steady and it appears in the same places so it can be easily detected.

The more accurate the model is, the more precision excluding those precipitating areas in the CRRPh basic output.

The lightning algorithm assigns a rain rate to every lightning depending on:

CRRPh is set to zero in the following cases:

Climatological profile is necessary as a back up for Parallax correction in case NWP is not available. This information is included in the software package.

A file with information on every lightning occurred in a time interval is mandatory to choose the option of adjusting the CRRPh precipitation pattern with the lightning information.

CRRPh model configuration file contains configurable system parameters in the generation process of CRRPh product. The CRRPh product related parameters refers to ancillary datasets, numerical model data, parallax correction, lightning module, stability correction and cloud water path correction. The complete list of these parameters and the explanation of the most useful ones are available in the"User Manual for the Precipitation Product Processors of the NWC/GEO".

CRRPh product is coded in NetCDF format. The available outputs are the following:

crrph_intensity output contains the rainfall rates associated to convective clouds. The rain rates can take values from 0.0 to 50.0 mm/h with a step of 0.2 mm/h.

crrph_status_flag provides information on whether parallax correction, lightning algorithm, cloud water path or stability correction have been applied, the inputs used to compute the product and some other aspects:

Use of optional data:

Bit 8: crrph_intensity was a hole because of the parallax correction, and then was filled by the median filter

Below are shown different images of the instantaneous rain rates CRRPh product, day and night algorithms. It has been obtained at full resolution.

Below is shown an image of the hourly accumulation CRRPh product. It has been obtained at full resolution.

Conventive rainfall intensities  and convective rainfall hourly accumulations can be processed by the following satellites: MSG, GOES-16 or HIMAWARI-8.

An example of rain intensity visualization over USA is shown below. It has been obtained at full resolution. 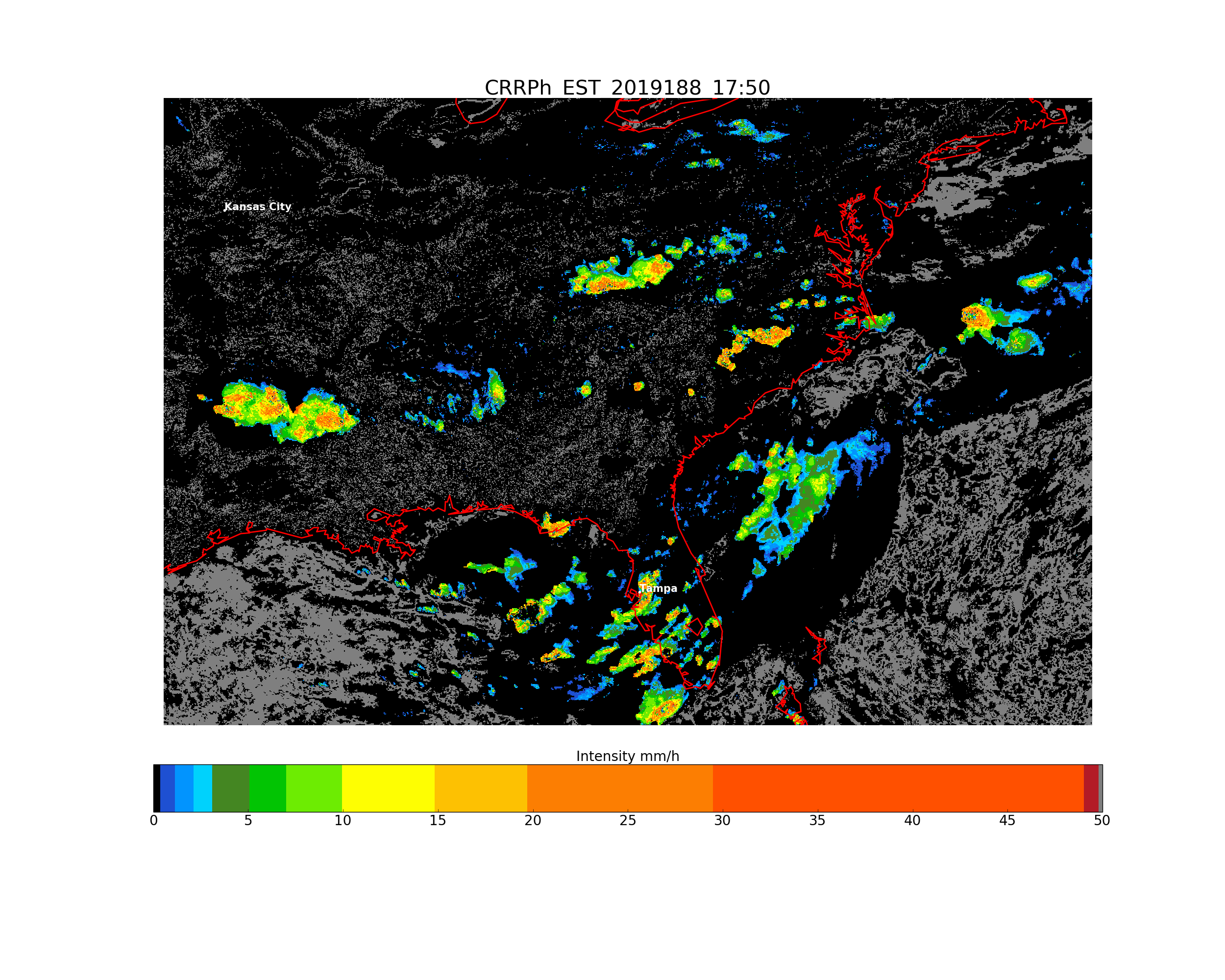