Access to "Algorithm Theoretical Basis Document for the Extrapolated Imagery processor of the NWC/GEO" for a more detailed description.

1. Goal of the EXIM product

The EXIM processor applies kinematic extrapolation using atmospheric motion vectors (AMVs) for displacing SEVIRI/GOES-N/GOES-R/Himawari pixels and/or selected NWCSAF products. Thereby, one gets forecast imagery / NWCSAF products up to a lead time of 1 hour. AMVs are provided by the NWC/GEO High Resolution Wind processor (HrW). The catalogue of input undergoing extrapolation, from which the user can select, consists of:

The AMV field corresponding to a time interval T between current and precursor image is applied n times to the current image at time t, thus producing forecasts up to n*T minutes, with the maximum lead time in minutes being chosen by the user. For each pixel P0, the new location P1 (at t+T) is determined by applying the motion vector at the original pixel position. In a second extrapolation step (for t+2*T), the location of pixel P1 is extrapolated with the AMV that had been observed at P1 at starting time t. The repetitive application of the procedure yields trajectories under the assumption of a temporally invariable displacement field. When applying the trajectory field in order to make the kinematic forecasts, a distinction is made between continuous variables (e.g. brightness temperature) and categorical variables (e.g. cloud type).

At each pixel location obtained from the trajectories for the currently considered time step, the contribution of the pixel to the pixel(s) of the forecast image around this new position is assessed. In the general case, the new x- and y-coordinates are not integer values, so we use weighted contributions to the 4 pixels with which the 'forecast pixel' overlaps. For the example shown in Figure 1: Position of pixel forecast to be at x=286.2/y=117.3. Pixel 286/117 overlaps with 0.8*0.7=56% of the area of the forecast pixel depicted by the dashed blue line. Hence, the value p of the pixel at time step i-1 is stored with a weight factor w=0.56 for position 286/117. The other three affected pixels are treated analogously. After evaluation of all trajectories, the pixel value at any position of the forecast image is determined from the individually collected contributions through the weighted average.
For pixels not at all touched by a trajectory, the post-processing step searches for adjacent pixels that have been assigned a value. This is done in order to prevent gaps in the forecast image which occur due to diverging AMVs. The search is carried out in 8 directions regularly arranged around a circle until it hits an already classified pixel in the respective direction. To obtain the parameter value for the pixel in question, a weighted average is computed from the values at the up to 8 neighbours. The weights are 1/r2, with r being the distance between the void pixel and its neighbour.

For categorical variables, the pixel value of the originating pixel is directly attributed to the new pixel location. The new pixel location is obtained by rounding the (usually) non-integer x- and y-coordinates from the trajectory. In the above example of a pixel forecast at position x=286.2/y=117.3, the parameter value at pixel 286/117 is set to the value of the original pixel. Here, pixels at positions 286/118, 287/117 and 287/118 are not impacted in this step. If accidentally another trajectory would target that pixel later, the parameter value is a guess just as good as the one assigned before. Of the possible arbitrary decision rules, overwriting is chosen in EXIM, i.e. the last candidate wins.
For pixels being not at all touched by a trajectory, the post-processing step searches for adjacent pixels that have been assigned a value. The search is in 8 directions regularly arranged around a circle until it hits an already classified pixel in the respective direction. From the up to 8 neighbours, the class to which the majority of neighbours belongs is determined and attributed to the target pixel. If there is a draw between two categories, a decision is made on the criterion which class has the lower sum-of-distances between the currently considered void pixel and the affected neighbours. If also this criterion leads to no decision, the selection is arbitrary, depending on the order in which the adjacent pixels were assembled.

In case the optional cloud top height checking (new in v2021, exploiting the NWC/GEO CTTH product) is turned on, the appropriate layer and the associated set of neighbour AMVs is taken for each pixel. Note that if this option is chosen, it is assumed that the user wishes to suppress any extrapolation or gap filling that mixes information from levels with too large vertical distance. In this case, the procedure withholds pixels that are not inside the chosen HrW layers and it suppresses the post-processing steps described in the two preceding sections. The resulting gaps in the output have the “invalid” code characteristic for the respective product.

Input to the EXIM processing are:

Figure 2 contrasts a 1-hour EXIM forecast of NWC/GEO PC-Ph with the product derived from the observations 1 hour later. A conspicuous feature of the forecast image is the meandering western edge, where displacement vectors point inward and no observations from regions further to the west were available to fill the image. The void region becomes larger with increasing leadtime and is a feature that might influence the decision on the covered domain. 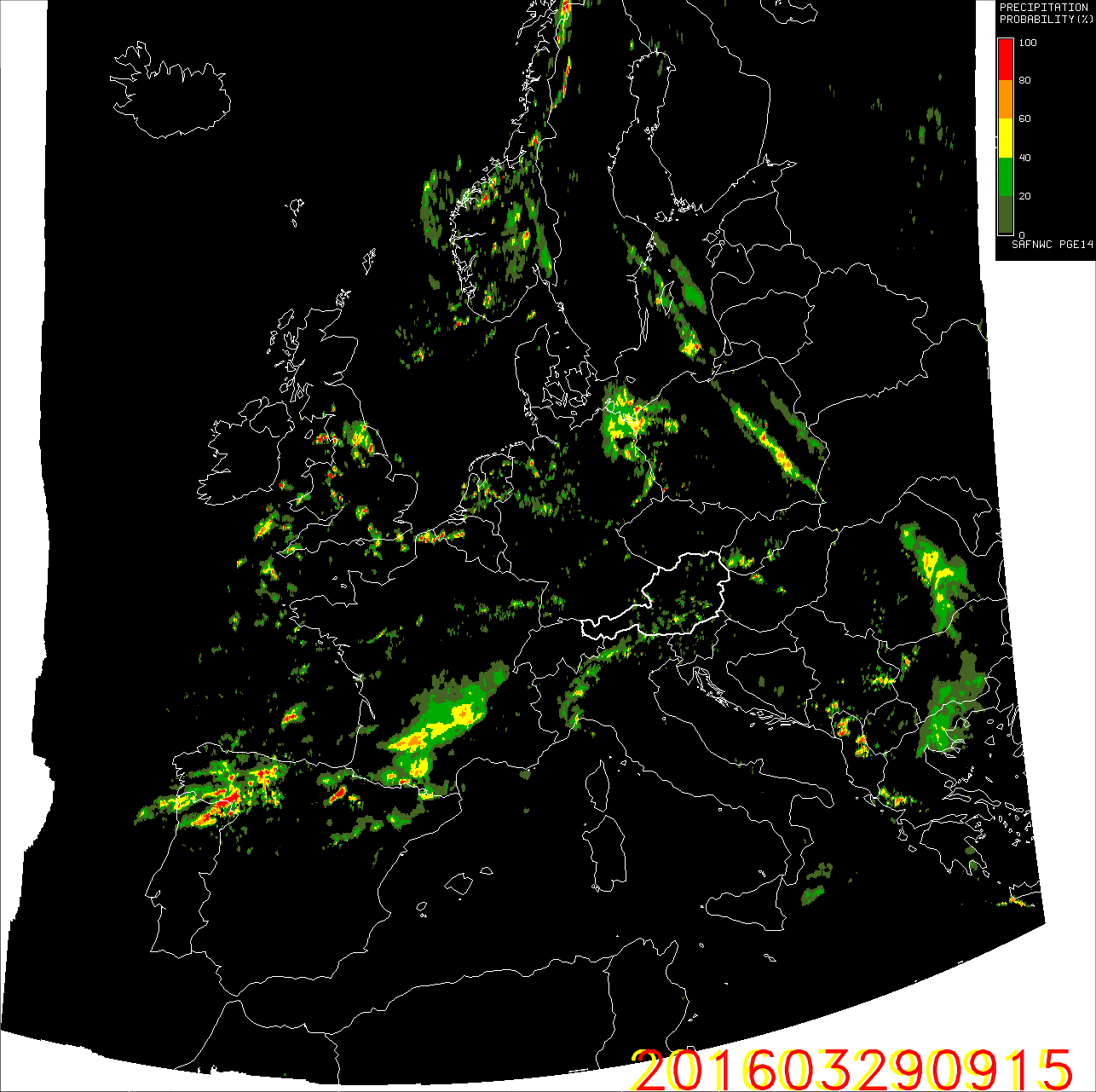 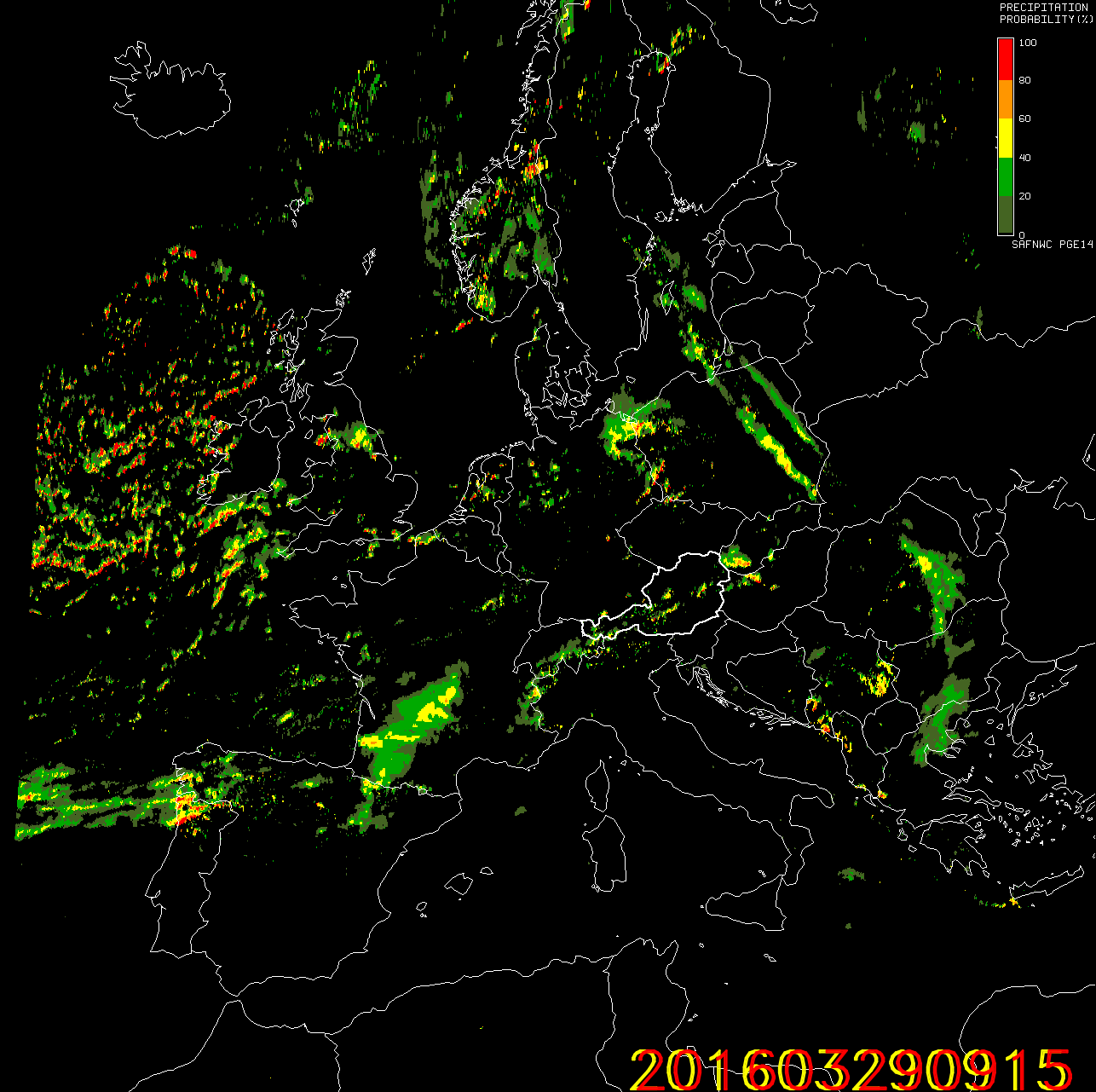