Access to “Algorithm Theoretical Basis Document for the Wind product processors of the NWC/GEO (HRW v6.1)” for a detailed description

Note: The adaptation for GOESR satellite series is limited for the moment to GOES16 (GOES East) satellite only, which covers the whole American continent except Alaska and the adjacent Canadian regions. The adaptation to GOES17 (GOES West) has been delayed due to the problems observed in the cooling system of its ABI imager, which affects all its infrared and near infrared channels, and has caused up to now variable instabilities in its image output. A solution to this is still to be found.

The product includes pressure level information and a quality control flagging, giving some indication of its error in probabilistic terms. It has been developed by AEMET (the Spanish National Weather Service) in the framework of the EUMETSAT's "Satellite Application Facility on support to Nowcasting and Very short range forecasting" (NWC SAF).

The AMVs and Trajectories can be calculated for up to two different scales at the same time: "Basic scale" and "Detailed scale". The corresponding dimension of the tracers to be tracked can be defined by the user, with a default value of 24 pixels for the "Basic scale". Many other processing parameters can also be configured, in particular the region and the satellite channels to be processed for the AMV calculation.

This product can be useful in near real time applications including:

Several different HRW outputs (as BUFR or netCDF bulletins) are provided for the calculated winds and trajectories, with a level 2 of processing. A level 3 of processing (as a grid interpolation of the winds or a meteorological analysis based on the data) is not included.

Eight different steps are considered in the processing of HRW algorithm:

1. Initialization of data: next matrices are read or calculated for the start of the processing, by the NWC/GEO-NWCLIB library, for the running slot and region in which HRW algorithm is calculated:

An option inside the HRW algorithm process permits that new tracer centres for the running cycle are defined at the final locations of AMVs calculated for the previous cycle. This way, a set of “Persistent tracers” can be successively tracked in consecutive images, and “Trajectories” are defined through the progressive positions of these tracers throughout the time.

Since NWC/GEO-HRW v2018, an option has been implemented to increase the spatial density of tracers and AMVs at low levels. This is done reducing to a half the distance betwen tracers related to low clouds and very low clouds.

3. Tracer tracking and Wind calculation: One of two well known methods can be used for this process:

The tracking area in which tracers from a previous image are looked for in the current image, can be defined through the extrapolation of the linearly interpolated NWP wind guess for a quicker running of the algorithm. Nevertheless, this option is not used as default one to reduce the dependence from the NWP winds. The best three tracking centres are kept, from which one is taken at the "Quality Control step".

5. Quality Control: the “Quality Indicator method”, developed for the AMV calculation at EUMETSAT/MPEF, has been adapted for HRW algorithm. Several consistency tests are if possible computed, considering:

Three individual “Quality Indices” are calculated for each AMV/Trajectory, considering the normalized statistical fitting functions described by the method and the weighted sum of the partial consistency tests:

6. Orographic Flag: an “Orographic flag” is also calculated, related to the detection of land tracers, and tracers blocked by orography or related to orographic waves (for which the AMVs/Trajectories are not displacing with the corresponding atmospheric flow), with next possible values:

Possible test values for each case are:

The validation statistics are written for each running slot in a specific file S_NWC_HRW-STAT_*.txt, including information per channel, per level or as a whole on the number of AMVs (NC), the mean wind speed (SPD), the normalized bias (NBIAS), the normalized mean vector difference (NMVD), and the normalized root mean square difference (NRMSVD) with respect to the reference winds.

The NWP reference wind at the AMV level and the best fit pressure level, and the vector differences with both, can also be calculated and stored in the AMV output for further processing and research.

Depending on configuration, AMVs and Trajectories are provided in the form of BUFR or NetCDF bulletins, considering separately each processed region and each tracer scale used (“Basic scale” and “Detailed scale”). The different options for the HRW outputs are:

The content of the default option for HRW algorithm, the first BUFR bulletin format, includes next parameters:

Processing indicators for each AMV/Trajectory sector: 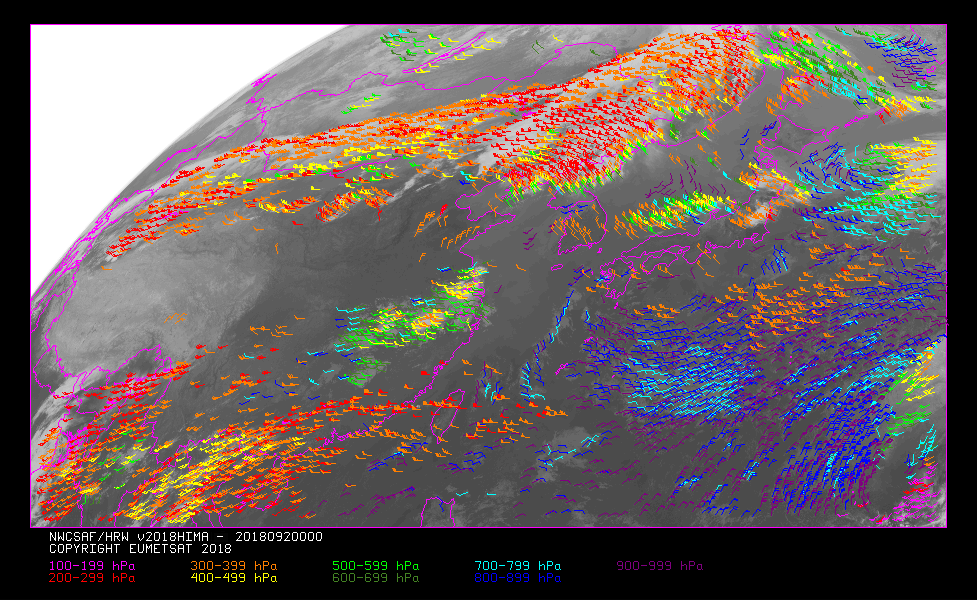